Another year’s half marathon come and gone. As I often point out, I prefer to do the half marathon because I like to sleep; consequently doing the full 24-hour marathon simply wouldn’t work for me, as it would take me at least a couple of days to get back to normal.

Making things easier this year was my recent acquisition of Scrivener. Thanks to the program’s separate panes, I was able to have the prompt always visible as I wrote: 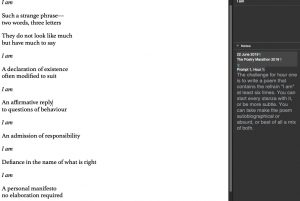 As before, I worked with all the prompts for the sake of simplicity. That said, a couple of them still gave me trouble. For example, for the hour 5 prompt calling for a poem about a dream, nothing immediately came to mind, so I dug out a couple of my old journals that I knew included detailed descriptions of dreams I’d had. The problem was that the ones I still have dim memories of today turned out to be not that interesting. I finally just picked one and tried to reduce it to the barest details (taking a couple of liberties along the way). Similarly, none of the photos in the hour 4 prompt did much for me—and my first choice (the black-and-white photo of the woman next to the tipped-over stool) felt a little too obvious for me. And the song chosen for the hour 7 prompt was not at all my taste, so I had to take some time to find something I would find more inspiring.

In the end, most poems took me 30–45 minutes to write, lightly edit, and post. On the whole, I think they turned out all right. At least, I didn’t hate any of the poems I posted.

This time, I did get around to checking out the later prompts and using them to write additional poems. I posted only one of them (also written while listening to music), however.