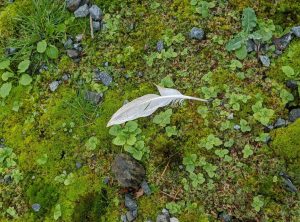 As a kid I loved the nature films
featuring time-lapse photography
rosebuds, opening
caterpillars cocooning
anything hatching from an egg

my father worked in television so I knew
the basics of cameras and pictures
time-lapse films in enthralled me as
I also marveled at the patience it took
to watch an egg hatch, or tree bud

walking through the park today I saw
a feather lying on a bed of moss
ordinary, black plume – pigeon, crow?
I sat on the stone ledge just feet away

I waited, watching the feather intently
an occasional breeze, or passing biker
caused the feather to flutter, not move
even though I know better, I waited to
see what would happen to quilled fond

there was nothing to hatch, or bloom
nothing was going to transpire except a
gust of wind taking the feather, or maybe
another bird would pluck it to line its nest

I sat, expecting nothing, was not disappointed
but for just a few minutes I was once again
curious ten-year-old kid, sitting in a class
observing just how this crazy world works

3 thoughts on “No lights, no camera, no action”