A tiny ball of orange fur,

with matted eyes and flea-filled ears,

we rescued her from sudden death beneath our tires.

Mothered by a long little wiener and a gentle giant Boxer,

she never knew she was a cat.

In her confusion, we called her Caitlyn.

…until the day ‘she’ splayed her legs, showed her balls, and became known as “BRUCE.” 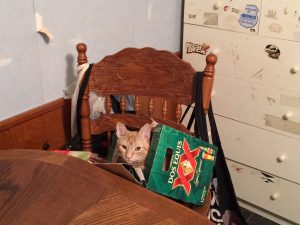 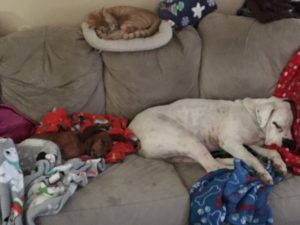 *********This is the true story of our ‘rescue’ cat Bruce. If not for the cries of his daughter, my boyfriend would have crushed the poor kitty. Instead they brought the poor baby to me. We nursed the kitty to health and our dogs, a mild mannered motherly Dachshund and a 90 pound Boxer who thought he was a lap dog, raised the kitty as their own, teaching kitty to beg, eat dog food, chase balls even. Kitty went through several names: Angel (because we saved kitty on the anniversary of the day I’d lost my beloved cat Sweet Pea); Owwbitch (because kitty loved to gnaw on toes; Caitlyn (identity crisis); and finally Bruce, once we discovered ‘she’ was ACTUALLY a ‘he’.**********