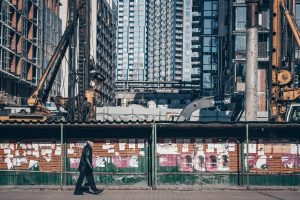 This used to be a street with a bakery.
He had a vaudeville memory, it embarassed him to keep hunting
when he knew he’d only have to turn around and
wait for transport, defeated again.

What progress was this? What ribbon cutting?
For whose benefit were these gleaming facades
that no one was ever seen entering?
The more things cost, the fewer people actually had right to enjoy them,
or so it seemed.

He was alone now.

He used to work in an office. Not one of these metal and steel monoliths,
but some things never changed. All offices have the usual temptations,
and he’d been caught indulging in his. First his wife left him, then his bosses
found fault with him.

That corner office was to blame for everything that followed.

He lived in a closet-sized apartment over what used to be a music store.
The store had been vacant for a year. Earlier that week, two younger men showed up –
the new owners – making notes and measurements, introduced themselves.
Shook his hand. He grimaced as he shut his door. It was written
all over their faces their intention was to turn him out
as soon as they began work in earnest on whatever they planned
for the building.

He knew what he had saved. He wouldn’t be sleeping in the park with Soapy.
If you were frugal, you buy the paper and a coffee on Sunday.
His kids didn’t call, but, if he had to ask for a room, he’d frame it as temporary.
Which it would be. The suburbs were a slow death. Faster for him.

He shrugged. He didn’t make plans past mid-year, anyway.