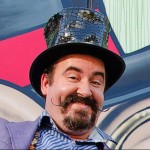 Is a member of the dandylion collective, a small writers’ group based in Adelaide, South Australia.

He is primarily a poet, who likes to drink wine (his predilection is Sauvignon Blanc, bubbles is second preference, & is also partial to pretty much anything else – except red bubbles, urrrgh!).

He has been most recently published in Eureka Street & InDaily Poet’s Corner; as well as poems in The Infinite Dirt, Patterns of Living, Light and Glorie, Flying Kites, dB magazine, Iron Lace & others.

Career highlights include: having his poem “Many-Worlds Quantum Mechanics Vs Earth-Based Grease Monkeys” published in The Best Australian Science Writing 2013; winning Second Place & $1000 for writing a poem on a pretty obscure topic after finding a competition which closed in 6 hours that same day; & having “i thought the moon was a cop car in my rear vision mirror as i drove home late last night …” short listed for 2012 Satura Prize.