There are people that nobody talks to.

Allison lost both her arms in a car wreck. Losing arms isn’t like losing a leg. Wheelchair-bound is a common disability. Not easy to live with but regularly seen. Armless girls, well, nobody talks to these.

Having outgrown her girlish figure, skin’s luster gone, replaced with wrinkling. Greta doesn’t know how to exist in her body anymore. The fears run deep, who will I be when nobody talks to me?

Stan’s heard voices his whole life. They come to him whispered, but not from another world. The thoughts are from those around him, anyone he touches, who then thinks a word. Nobody touches Stan.

There are people that nobody talks to. 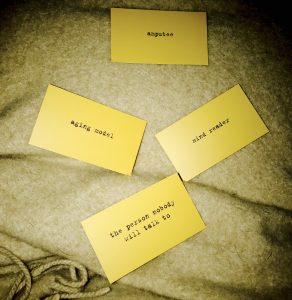 4 thoughts on “Nobody Talks To”