The house is in need of paint, father,

plaster peels off the walls.

The verandah stares vacant and blank,

no life within its halls.

It’s just a house, I said to myself

as I passed down that road,

just a house, abandoned and dark

that once housed our souls.

How can it then be, just a house?

I thought again as I gazed at it.

This is the house where you died

and the home where we lived.

So do not laugh if you find me there

gazing back in time and space

not all of them broker peace.

Taunt me not if I see my childhood

etched on every parapet and sill

I may grow in years but am none the wiser

and this little girl needs you still.

Waiting to be found

Among the trees and leaves

Fireflies alight to the ground. 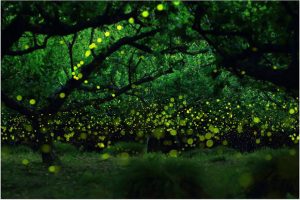 There are forests in the poems

Waiting to be found.

Branches that those blithe spirits cross

Flutters of light spring a chorus

In a world filled with stars.

There are fairies in my poems

Waiting to be found.

He has needed you from the moment he first saw you. At first the attention was light and flirtatious and you thought it gave you joy. Then he became more demanding, wanting to walk by your side and watch you while you were sleeping…till he became a part of your life. He came along for movies and parties, even accompanied your family on vacations. Till you realised you are only one of his many conquests. He was hurting you and you had been fool enough not to see it. He is eating into you, bit by bloody bit.

So you told him to leave.

He sneaks back into your life with false promises and placebos and you cannot get rid of him. As much as you dread it, you know you have to do something about him.

It is evening, you are quietly sitting at the water’s edge, deep in contemplation. It is time.

You rise, the water slides off your body as you shake out your hair and pull on a pair of shorts over your wet swimsuit. It is completely still and the wind has dropped, nothing stirs. From behind you, you can hear the sounds of the children as they animatedly discuss their day, bits of music stain the air. You turn towards the sounds but pause and turn away following the narrow path among the overgrown grass. There is no birdsong, only an ominous silence as the stony old path twists and turns away from the house biting into your bare feet … till you reach the ruin of the old out-house that no one ever visits. You climb the few steps, noticing how the weeds have choked the entire stair and think nothing of it. Stones, bricks and broken walls greet you and you enter the cavernous dark. You know there are snakes that inhabit the ruins and you are afraid, but you know you cannot turn away. Not now.

You make your way in the semi-darkness till you reach the short stair-case. A narrow shaft of light falls from between the leaves of the Banyan tree that has made its home on the outer wall. You climb the stairs slowly, your heart is beating wildly even as the stench of decay assaults you. You know what you will find.

There he is in front of you. Tall, misshapen and just as grotesque and ugly as you remember. To think that at one time you found him attractive. He looks at you pleadingly, his eyes glimmer hope. The chains clank as he pulls forward but you know they will not give. He rattles his chains; he is, all at once, demanding and pleading and you  almost forget and give in. But something stops you. Maybe it is the recollection that he now threatens your world, your very existence?  He’s always needed you, he is saying, he will never leave you.

You look at him with loathing. Even pity.

So what will you do with this Knave, this killer, this terrorist who would riddle your home with bullets if he could?

Will you feed him?

Or will you let him starve to death?

Who came into my life even before I was married

As I followed his Court for the sheer entertainment

A man of temper, particular to a fault, no mumbling

And bumbling in that Courtroom was allowed.

Had me chafing at the bit. But he was unputdownable,

Won me over bit by tiny bit. An untamed mare was I,

To snare a perfect fit. A man of high morals,

He lived by his own code, never shied from the truth

No matter what consequences would hold.

Generous and kind, he gave of himself and showered gifts, nothing

Was too dear for those he cared about, nothing to be feared.

Much loved, much revered, when he died the world trembled

The skies opened wide and poured its’ contents into the night

Life came to a standstill, our world held a collective breath;

As for me, I was broken, another father lost to Death

Snuffing out another light long before its time.

(P.S. I have never even attempted an ode before. Any suggestions would be welcome.)

That thin line
between the full moon
and insanity…

That ribbed edge
of the flower bed
where only weeds grow…

That gold brocade
of the wedding saree
I never wore again…

That flicker of light
caught in a raindrop
poised to fall…

That peaceful glow
of a million stars
on a moonless night…

That is where we walk together
father and daughter
talking, seeing, not-seeing…

restless in my sleep

To write a self portrait I have to step back

And take a long good look at myself.

I turn to the mirror, eyes, ears, nose, check.

Two hands, two legs, a torso, quite a normal

Glasses that balance on the top of the head

Since the pandemic. That is me, as far as physical

Appearances go. I like a good steak, I do not trust

In Gods, I’ve been called ‘irreverent’ and worse.

I live with my mistakes, I do not let them define me,

And I strive to be happy. I keep to myself

Most of the time, I have a few close friends, well-defined.

I enjoy my music, the company of those I love

Of being alive. Don’t cross me though, I never

Learned to forgive. I don’t try too hard either.

Sure, you can hear, the death knell

of your dreams, the grand plans for your life

that you charted as a child.

for the lilting tune of the night

as it calls to you from memories

filling your world with delight.

Listen for the sound of laughter

as it tip-toes in quietly, barely heard

above love, which is silent and still.

There is hope yet, still your mind and listen

Listen to your heart, as it carries you along.

Just be still and listen. Be still,

And listen as your world bursts into song.

“Books were safer than other people anyway.” Neil Gaiman

So I buried myself in my books,

That people were sometimes poison

And could damage the soul.

My books became my friends

In a world confused by rules

Even now I find bits of my childhood:

A feather here, a flower there,

A leaf pressed flat among the pages.

Those are my friends,

The ones that keep me from screaming

When people get too much.

It rained that night,

that sat upon my tongue

as I felt the coolness

making castles out of mud

In the moonlit path we walked together

“There are wild foxes here,” you said

And I took a step closer

Wondering if we would see them unless

They saw us first and swallowed us whole.

My hair caught in branches that swept low, pulling

At our clothes. “It’s eerie,” you smiled, disentangling

the strands, “but beautiful,” I murmured, breathless.

“Exactly. That’s why I come here for a stroll

I think I said something but it cannot be denied

that night was magical, musical. I confess

I almost gave you my heart. I say almost.

For when morning came we went our separate ways

Our lives reverberated and re-wrote themselves

Only some moonlit nights you will find me, I guess

Pacing those paths. Trying to find a way

To soothe this restless soul.