I’m blinded by love and hate.

In loving you, I hate myself.

I’m bond by hate and love.

Your hate makes it hard to breathe,

so I love you, hoping it’ll be enough.

but when she met Alice,

She had spent a lifetime making mistakes,

cheating on her husband, and eating too much,

but what was she to do during those spells of emptiness?

The Queen had to find entertainment somehow,

So why not chop off a head or two?

Stars used to dance and fall in love.

They dreamed during the day
and told stories throughout the night.
They were friends with the moons and
guardians of the plants.
Comets taught the stars to shine
and Pluto always made them smile.

Chaos grew bored and hungry.
After he gathered the black holes
and quasars, he pulled and mashed
Earth into something only he could enjoy.
The trauma of humans will be
enough to sustain him for millions of years.

The stars have stopped laughing and dancing.
They now watch us and cry.

America is lost and

no longer knows herself,

but truly did she ever?

Land of the white and

home of the male.

My skin is a traitor,

my body a prisoner.

When we we have been dismantled

and there is nothing left worth saving,

will we admit we were wrong then?

I know no home.

I know no land.

I am an agent of those

fighting to be free.

No matter how violent or volatile or unhealthy,
they keep slowly killing each other.

We are all slowly dying anyway, so why not
have great sex and inside jokes along the way.

He hates me, you know?

Truly wishes I was dead. I think if he could,
he’d steal a move from the Joker and
push me off a building.

I’m not as smart as Harley Quinn,
but I know enough to know
that her and I are just ignoring the signs
until love kills us.

Ever known anyone truly in love with himself?
I have. It’s maddening.
The lies. The secrets. The cruelty.
It’s like being in love with a cranky toddler
who blames you for everything that goes wrong.

They say Harley was crazier than the Joker,
she pushed harder and faster and was more reckless.
Maybe that’s why I love her so much.
Because to love someone who’s crazy,
you have to be crazier than they are just to survive. 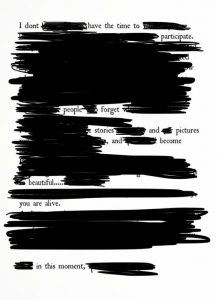 Once, you had cotton candy princess hair.

You had butterflies in your tummy and
noble intentions made your heart beat.
You had a soft voice, giggly laugh, and couldn’t
ever remember where you put your phone.

Music was your oxygen.
Poetry was the only language you understood.
You lived for books and learning and silence.

Now, you have a cotton candy heart.

You have moths in your stomach and
bitter outlooks block your aorta,
You have a hard voice, RBF, and can’t seem
to let your Iphone out of your hand long enough for it to cool.

Music brings the tears, so it’s better not to breathe.
Poetry is the only way to cover scars.
You live to sleep now and search for friendly faces and
you always look for the exit before you sit down.

Your soul was pretty, pink bubbles and glitter and hope.
Now, it’s hardened stone, just waiting to be rolled away.

I hope for our sake, you get better.
Breath some music and eat some words.
You can’t be this numb forever.

In the darkness of the Underworld,
a faded hush fills the lungs of every soul.
Moonbeams light the way
for a little goddess to tiptoe alongside
purple Water Lilies and peachy pink Lotuses.

Persephone wrists and the curve of her neck
share the same pale hue as her inner thighs.

The Lord of the Dead watches her,
his daring little goddess, and
his concrete self control weakens again.
He might be damned to live without her.

On a shelf, in an office, deep in Tarturus,
Hades’ soul waits, a lone jellyfish,
barbed with stingers of loneliness and hate.

His pink little goddess of Spring could smell
his soul, like ripe plums and honeysuckle in
an August heat. Her teeth nibble on her bottom lip.

On tiptoes once more, she reaches for his soul.
She feels its’ fog of uncertainty. To be alone for so long.
To have waited for so long.
“But, I’m here now,” she whispers to
the inky blackness enclosed in hard glass.

Hades’ opens his arms upon her return,
she can’t help but leap into them.
Guiltily she shows him the jar-
together they mend the God of the Underworld.
“I was waiting for you too, you know?” she sighs into his lips.

Together they make a King and Queen.

I have this tiny, little, guilty pleasure.
Sometimes, I don’t look where I’m going,
and I make men walk around me.
You see, it’s funny because they
walk right through me instead

Another guilty pleasure:
I date the wrong guys.
The guys who can’t keep rhythm,
and don’t understand reason.
You see, it’s perfect because then,
they can always blame me.

A tiny, little, guilty secret:
whether he was pinning me to the ground
or holding a gun against my head,
I was asking for it,
or at least that’s what my mother said.

Yuck…this needs a lot of reworking, but here it is….

In Neverland, all parts of our childhood hide:
the boy of our youth, the girl of our dreams, and the man of our nightmares,
living by sun and moon, land and sea, adventure and book.

In Neverland, selfishness rules:
a crocodile eating the weak, lost boys who never grow up, and the man with the hook,
but even in Neverland, love is required, so

Tinkerbell was always there for Peter, and Peter, he chose Wendy.