I am excited to announce that I’ve been selected as “Writing the Land” poet for Whatcom Land Trust parcel, Todd Creek. Here I am standing on the gravel bar at the South Fork  Nooksack. I will write three poems during my tenure, May 2022-May 2023, to be posted on the website. 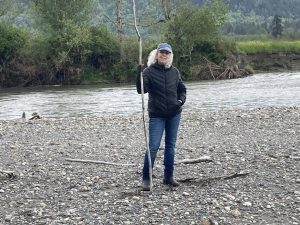 Natural for me to fear lost life,

this lightning flashing above me.

Terrified in the green chair,

Some people called us Forest Rangers,

though really, we were the lowest GS

in the USFS. Not the highest tower either,

certainly not as tall as a skyscraper,

was high enough that our heads were

in the clouds on late summer days.

When socked in, I made bread from

On the tower, we were often scared, lonely,

or stir crazed. We’d been struck once,

which frightened us badly, and some storms

were much more dangerous than the

cumulonimbus cloud we’d been hit by,

which made us sensible to fear for our lives.

Mother stroked and I cried in the bathroom.

I was acting so strangely, trying not

to yell at the kids. But I did, and my sister

yelled at me. We did pull it together,

roasting the turkey and mashing potatoes.

There was gravy and the candied yams

Don carved “the bird”, that’s what Mom called it.

And, we drank wine, toasting our mother who loved

her mashed potatoes and gravy. And her vino.

Outside, it’s 91 degrees, which

reminds me of the time I felt lost

but wasn’t. I was at the movie

waiting for my sister. We would

see a movie together and then eat chicken

at the outside restaurant. While I waited,

children raced about and shoppers

in the air-conditioned mall. Suddenly, I felt

At last, my sister showed up, all bubbly

and full of fun. That moment, imperceptibly,

the feeling left me. We bought popcorn

and Cokes and found our seats. I told

her what had happened. I don’t remember

what she said, but perhaps it was something

There was a party…adults drinking,

in the fountain. Across the street,

a grouchy old guy was about to fall

down the stairs and die; he’d seen

the little girl in the water and was

trying to warn someone. The woman

cellist…the girl’s mother and one

of the flirters…was favored by the

host, a Russian guy with an ex-stripper

wife. The wife was offering the cellist

a lap dance when the girl

in the water was discovered.

Although the stripper said she never

slept with her clients, she lied. It was

her daughter who had pushed

the girl into the fountain. That remained

secret. The best friend of the cellist

knew CPR and saved the little girl. She was

trying to have a baby and had asked for her

friend’s eggs a half-hour before the party.

Her friend thought it was disgusting

to ask for someone’s eggs. And why,

if you did ask, would you ask just before

a party over wine and cheese? There

was an ambulance and a helicopter

and a traffic jam. There were terrible

nerves and tears. Turned out the best

friend’s mother was a hoarder. And

the best friend was a bit of a thief: a shoe,

a necklace, other things that went missing

from the cellist’s house. The cellist changed

her mind after her little girl came home

from the hospital, and she found the

missing shoe. Puh! She would give

her best friend, the dummkopf, her eggs.

There were no more parties at the Russian

Along the path, the dog stops to smell oat grass,

rose bushes, and the trail crossing from pond to lake.

Ducks cross the path after dark, or early in the morning.

Daily, I follow this same trail past the lilies, past the cattails,

past the open water where the Virginia Rail has been

for a quick viewing more than once. Life birds, some people

call our winged friends they’ve been hunting for a long time.

Finally a spotting…or not. There are other perks on the path:

eating a pink rose petal, a Indian plum, or a Salmonberry. Soon

the thimbleberries will be ripe. This year I may try making jam

from them…like my grandmother once did.

Twice, while peeing in the woods, I spotted a geocache.

In one box, I found a pair of haircutting scissors. It was up

near a lookout tower that I’d hiked hours to. That hike about

killed me. I had to rest all the next day to get my electrolytes

balanced. I rolled out my sleeping bag on a metal frame and

mattress. One should stay away from metal in a lightning storm—

there was metal all over that tower. Once when I was young,

I was in a tower when it was struck by lightning. It was the loudest

noise and brightest light I’ve ever seen. I was terrified. If I hide

a box for someone to find, I would put in it a booklet of lightning

rules, a notebook and pencil, a pocket knife, and a compass.

I would leave a note that said, write your dreams and find your way.

~On a line from The Year of Magical Thinking, by Joan Didion

“No eye is on the sparrow but he did tell me that.”

Even when the dew was on the grass, he rang

with the clear air of morning. The heat of noonday sun,

You keep him alive in a photo, in an article of clothing,

in the way he relished green olives…your granddad’s

favorite. Grief will drive you mad. That is why you must

come to terms with life being precarious. No eye

on the sparrow…just on the greater flock crossing

the horizon. It isn’t too late to change this missing

of calm peace…someone told me that.  Once you went

to a funeral and the speaker said the dead was

a curmudgeon. You thought, is this okay, this irreverence?

You have made something of him that he wasn’t…but

it’s for my daughter and grandchildren, you argue. Yes

it is for all of us to recall his good, not his drinking,

his rages, his rudeness, his greediness. He was one of those

people who didn’t have an eye on anything but himself.

Not the dew droplets on the tomato leaves, not the smell

of warm pine pitch on the path, not his tired family.