I have become
ridiculously crowd adverse
since the pandemic

She said: It is weird out there.

[Prompt 12: Write about gathering with others. The specifics are up to you.]

We cover our mouths
gasping for air
snorffling through our fingers

[Prompt 11: Write a poem about laughter without ever using the words, laugh, laughter, or giggle.]

Some she eats
some she stuffs
and runs

for having shown a little compassion

We used to sing this food song when we were kids:

The relish tray is a staple
at our family gatherings and holiday dinners.

It had to have pickles – because we’re Polish –
and pickled beets and pickled onions and green olives.

The relish dish was always clear glass
with some star-shaped pattern cut into the bottom.

[Prompt 9: “Look in your cupboards and find a food that brings up a childhood memory, and the memory is your prompt” – contributed by Deborah Dalton]

What’s your major?
English?! What the heck can you do with that? Teach?!

I never really understood this obsession
with having to choose some approved “profession”
and as professions go, what was wrong with teaching?

I’m going to be a teacher.
College. English. But more than that.

Like so much in life, I was drawn
to the most abused and suffering.

For thirty years, I asked my developmental learners
What’s your major?

I’m going to be a teacher
some would respond
and I would offer a wisened nod.

But what’s your backup plan
Just in case?

He stands on the porch
surveying the landscape

They say women turn to gardening
in the years after childbearing

But in this household
the role reversed

Until now each plant can stand
on its own, propagate families

The universe did not provide
grandchildren in our lives

Instead, we sit out each night
look out over the blooming expanse

Take compliments from strangers
passing by enjoying the beauty

My husband guffaws as I beam
“It’s all his doing.”

The proud PawPaw
His family fills the yard 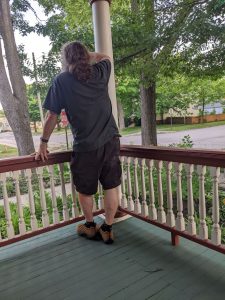 [Prompt 7: Look on your phone and find the 10th non-selfie picture and use that as your prompt.]

Remember riding in my Chevy Nova
through downtown Traverse City
how we blasted the Talking Heads
all the way down Front Street?

How was it that we had
so much time in our lives
to just sit around talking
and drinking Labatts and smoking Camels?

My kids are grown now
about that age we were
when we became thick and thieves
and probably did illegal stuff.

But we never got caught
and I hope they never do either
but if they do, meh – I’ll
chalk it up to chance.

We had it good for a while
didn’t we?
We had our whole lives
ahead of us.

Now here we are.
Age found us both.
I’m a mom, maybe a grandma soon
and you – how are you?

[Prompt 6: Write a letter to yourself from the perspective of someone who is no longer in your life.]

“But did you notice the flowers?”
asked the man who stopped
to help me fix the flat on my bike
after I had complained how
my ride had been ruined.

I had biked nearly fifty miles
churning hips pounding the pedals
eyes steady ahead, thinking only
of the next fifty I wanted
to cover that day.

Ever since, I have noticed
every bike ride I look around
see the wildflowers in the ditches
the planted flowers in the yards
miles behind me and miles ahead.

Even now, when I look into an image
a weatherworn window frame
tucked into its concrete wall and brick
spindling leafless fingers of ivy gripping tight
giving all the auspices of death –

But did you notice the blue sky?

[Prompt 3: Listen to the following song before writing a poem, you can also play it again and write with it: https://www.youtube.com/watch?v=N5j1AwBaPtk]