Zoom!  Olive looks worried, those big black labrador eyes stare into the webcam. She’s starting to tear up.  Has she done something wrong? Maybe she’s chewed Andrew’s new shoes, those white nikes worn only twice.  Maybe she’s desperate, pleading to go out. Why won’t Andrew step away from his laptop, end this meeting, open the screen door?  Mabel keeps messing about. She’s fiddling, turning her video on and off, grabbing her squeaky toy, looking anywhere but at Andrew, her dear old boss.  She’s bored, doesn’t want to Zoom anymore.

THE IMMACULATE KITCHEN:  COVID-CLEAN THOSE GROCERIES

what to make of her.  They wanted

her to shut up, stop talking about

what went on in that two-story house – the

stifling, the screaming, the belt descending,

the shutting down, out; the endless

you aren’t doing whatever you’re told.

always the hands in the wrong spot.

The shoulder, the waist.  Lower, not

to be mentioned.  Not even

not even there.  Shut up, put your fingers

Should be yours.  Make yourself smaller,

shrink your eyes, your heart, go away.

Don’t try to make him, her stop.

This will be my third time participating in The Poetry Marathon!  I am so very much looking forward to writing in community, especially during this upside down, social distancing, anxiety-ridden, inspiring, and challenging time.

Many thanks Caitlin and Jacob!

Happy writing to all!

one never does a lick of work

in a little black dress with jeweled straps like this

his second version made matters worse —

where there was two now only a single shoulder strap.

NOTE: “Hand-grenade of sexuality” is Jonathan Jones phrase from his article in the Guardian UK about the painting:

Sing me a song of eternal sunshine

tall as the sky, deep as the ocean

Sing me a song of deepest night

vast as the last galaxy, deep as a wormhole

Sing me a song of a billion euros

tall as the world bank, deep as a zero

No rain in nearly two months.

to an outdoor spigot or hose, I struggle

to water the garden’s plants.

The balcony is long as the house, my mistress’s plants plentiful.

She’s turned her back.

The watering can almost empty.

The balcony is long as the house, my mistress’s plants plentiful. 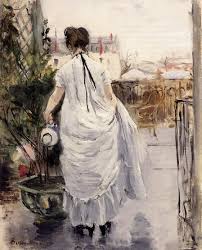 unless tethered – to a box, a table, a window frame.

I am stretched out, thinned by the space’s curve,

there is nothing to be done, held

as we are in individual bodies, capsules

molded to our fragile skin, then sealed

as if ticking bombs, unpredictable,

easily detonated, then dispersed into darkness.

I read the remaining book, again and again,

what we think we are supposed to be doing.

Come in, come in.

Roger. Over and out.

Is anyone listening outside myself?

Let me sit awhile, here, on your porch.

Let me relax, and recall what it’s like to be still

and present, as if there were no past

of meals I once ate, hotels I once slept in,

friends and exes, and others I once loved.

amongst the sleeping teacups & saucers for two –

as if that were my childhood’s doll and my dearest

whose chair has just now been abandoned for places unknown.

Let me imagine this is a memory I once recalled. 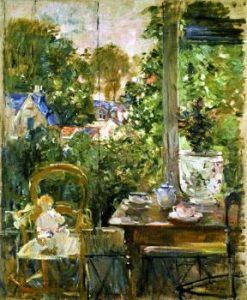 “Despite her [Marie Bracquemond] gifts, despite her striving, despite  her enthusiasm, the day came when with an obscure feeling of grief, she had to confess herself beaten.”

Never met a ladder I liked –

not the trap door pull-down device

to my childhood attic, nor the sketchy plywood versions

in construction sites where my brothers hid

and snickered as we circled below, our bikes

But that never stopped me

hauling myself up, hand over hand, until

I reached the upper limits, and could rest

hands on hips, as if lord

of all I surveyed below.

Blame it on grandma who climbed

a ladder at 82 to prune her trees,

and fell, breaking her back in two places

then recovering in one sweet week, as if

such a fall only required dusting oneself off,

then retying your apron strings.

Never met a ladder that made me sad

until I saw Woman on a Stepladder –

why did you stop drawing?