Waits patiently for me.

Or in the car.

There is a place where tennis balls die

And before slobbering pups are born,

And there, their fuzz grows worn and frayed,

And there, their covers are torn away,

And there, their dogs are told to play

In the tall green grass of the park.

Let us leave this place where canine cages cramp

And the dark dogs are chained and muzzled.

Past the Petco holding an obedience class

We shall walk with a walk that is harried and fast,

And watch when the cars with dogs drive past

To the place where tennis balls die.

Yes, we shall walk with a walk that is harried and fast,

And watch when the cars with dogs drive past,

For the dogs, they mark, and their masters, they know

The place where tennis balls die. 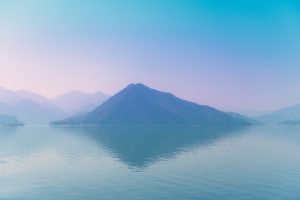 Rising in the morning light,

I must reach it or perish.

Rising out of the water,

I hope I make it in time.

poems I must create.

This damned vigil I will keep!

there’s no need to count sheep!

The pressure is just too great!

poems I must create!

I meet God each morning

He ascends over the peaceful waters

while I enjoy a fresh cup of coffee.

He sits down beside me

While I enjoy a fresh cup of coffee.

No words are spoken.

He sits down beside me.

He ascends over the peaceful waters.

No words are spoken.

I meet God each morning. 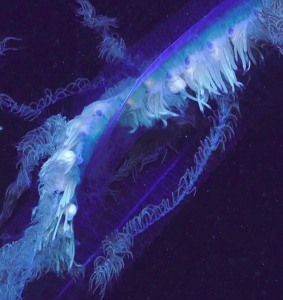 I am so stupid

Sitting alone in the dark

He scares the crap out of me

As he saves the world once more.

‘Twas the night before printing, when all through the Rails

Not a member was scribbling, not even those with net sales;

The final drafts were laid on the tables with care,

In hopes that a publisher soon would be there;

The Railers were tossing all askew in their beds,

While visions of Robert Scott’s The Corridor danced in their heads;

And with his dog in a ‘kerchief, Bobby Dorr tossed buck-naked,

Both dreamt, so content, on the journey they had taken.

When out on the lawn there arose such a clatter,

Bobby sprang from his bed to see what was the matter.

On his way to the window, he tripped – what a klutz –

Then struggled too long propping it open – what a putz!

His eyes finally fell on the breast of a hooker below,

Bringing lust to his loins – oh, how he wished he could go!

When what to his wandering eyes did appear,

But a broken-down Buick and a schmuck screaming for beer!

That fat drunken bastard so reeking and sick,

Bobby knew in an instance; it must be that prick.

As he vomited and shouted, for he had forgotten his name:

“Not Robert! Not Gary! Not Garrett! Not Mergler!

Oh, come on now, damn it! It’s not Victor nor Verner!

Just to lay on my couch! Just to find my front door!

Just get me home by the mornin’ or my wife’ll have my ass!

But if she meets us at the door, you’d better save your own ass!”

Towards his car filled with booze, that fat drunkard spewed.

And then, in a twinkling, Bobby heard the car start;

Oh, how he had hoped it was just that fat bastard’s fart!

As Bobby shook out the cobwebs that were still hanging around,

Down the chimney Dan Verner came with a bound.

Dan was dressed in black latex, from his head to his foot,

So his clothes were not tarnished with ashes and soot;

With bundles of contracts strapped to his back,

His eyes—how they twinkled! His dimples, how merry!

He winked as he wiped the sweat off his brow,

And grinned hard at Bobby before whispering a vow;

The stump of a cigar he held firm in his teeth,

And the smoke, it encircled his head like a wreath;

He had a kind gentle face and washboard-like abs,

For Planet Fitness had gotten rid of his flab.

He was chiseled and solid, a man made from raw steel –

Bobby gasped when he saw him, before starting to squeal.

One flick of Dan’s wrists and his biceps did flex,

Dan spoke not a word, but went straight to his work,

And he fixed Bobby’s typos while berating the jerk.

While handing Bobby his bill, a sarcastic joke he crowed,

Dan gave a nod of his head and out the door he strode.

He sprang to his Porsche, to his publisher gave a whistle,

And away they both drove out of town, quick as a missile.

But Bobby heard him exclaim, ere he drove out of sight—

“Happy Christmas to all, and to all a good write!”

Stuck to the wall,

Well past my days

To swat the fly

Crawling over its face.

That has any use for him.

How to tell time

it is by a digital number.

Heat radiates from your body,

as I caress the soft curves of your porcelain skin.

You make my heart quicken with desire.

I’m mesmerized by the fullness of your body.

Your aroma exhilarates my senses.

My lips caress your curves eagerly,

and my anticipation of our ecstasy is unbearable.

I embrace you just to feel your touch.

I promise to never let you go.

I drink in your loveliness,

as I whisper your name softly…

Death met me with a snifter of cognac and nod of his head. He was sitting patiently between my parents enjoying the flavor of an unlit cigar. He had been waiting with my parents for hours in the small airport terminal. My father paced the floor as my mother laid her head on Death’s shoulder. We were all flying to Milwaukee to bury my brother.

My parents hugged me, and I offered them my condolences.

Death said, “Your father is handling this extremely well. He knows his son is gone, but he is taking the necessary precautions.”

I held no ill-will for Death, because I know all must make his acquaintance in the end. I just wished he hadn’t taken Jim so early. He was only thirty-five, and we had many fishing trips yet to take.

The flight was surreal, for I can’t recall anything of the actual flight. It seemed to me that we never left the airport terminal in Appleton; yet, here we are at the hospital in Milwaukee.

My father heard the doctors read the unfortunate findings of the CAT Scan, and then informed him that they’ll take another in twenty-four hours. As my father stood by my brother lying in the hospital bed, my mother had been swapping turns with Death every few hours in the lone chair. Though I knew it wasn’t going to be a restful sleep, I sent my parents to the hotel for a few hours of slumber. All knew that tomorrow was going to be busy with phone calls and tears.

As our vigil began, Death offered me the chair, and I started in on editing my students’ poems. There is no rest for teachers, not even the death of a loved one. Death stared out the hospital window and swirled another cognac while rolling the still unlit cigar in his mouth. The only noise was the hiss of the life support system keeping my brother alive.

My parents returned the next day and others visited to pay their respects. It wasn’t until late the next day when my brother went for his next CAT Scan. It wasn’t until after ten that night that the doctors read the results. The aneurism had gone from bad to worse. Now, my parents had to make the decision, and they made it quickly.

“He never wanted to live like this. He made that well known.” Dad said.

Death and I nodded in agreement. We left my parents alone so that they could say their good-byes.

My parents soon exited the hospital room and I gave them both a hug.

As we turned to go, I paused to shake Death’s hand, and said, “Death, be not proud.”

“Death be not proud,” he whispered and turned to enter my brother’s room.