Tyger Tyger, burning bright,
In the forests of the night;
What immortal hand or eye,
Could frame thy fearful symmetry? Walt Whitman

Christmas pine and summer bloom, the stars at night,

I ask the silly spirits, read my palm, what’s in store for me?

in hands we trust, community we bind, humanity’s thrust

A fortnight between lunar to solar,

the moon leading the charge, ironically,

since she, stoic, obedient, seemingly lifeless,

bleeds light from her partner’s ebullience.

except for now, in this epic moment.

Each semester, the six months’ separation of moon

to sun, lunar to solar, a new batch of eager students arrive,

sun, moon, and stars, embarrassed by the shady passing,

and sit in scruffy rows among creaking computer carousels.

But today, as the moon leapfrogs the sun,

sobering the gleeful optimism of a new beginning,

anticipating the new school year, in the season of death,

stars falling from the sky landing in my cyber classroom.

This short summer of pandemic zooms, eclipse all

the twenty years of semesters spent in dusty classrooms,

pacing the moldy carpets in the institutional cement,

I see it inside a frame,

linger among the reedy edges,

a squirrel flitting past the pine

for the children who lie, prone,

top of the hand pillow dreaming

atop the soft detritus, a forest mezzanine

among the sussuration of chirp and buzz.

A cloudless sky of indigo dusk

tinges the mountains to the north

hibiscus, glory of an ebbing daylight.

A blanketed trust in quietude,

sweeps my eyes closed to smell

above a summer evening, the 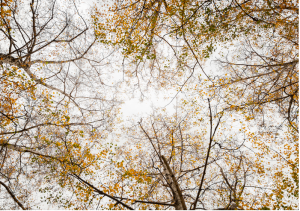 There’s only one true path.

Merely peer through the tree tops to find it,

encircled in the highest branches,

not the rain forest’s emergent stems and leaves, a promise

but the sun-baked, burnt autumn decay

the aftermath of billions of steps on a trodden trail.

I look up through the turmoil and treason,

and see the sun, dying brilliantly before eternity,

held in a heart’s center,

divine cell of my own making.

It’s been over two years.

You’d cry blood for me, for us,

your world, the world, your life.

of the mother shadow, she,

a pretense of domiciled mime.

And yet, you loved deeply.

sent me out to play,

in a white dress, I dare not

As you lay there, awake,

but barely knowing, I think.

You missed my misstep,

the splattered mess I made.

And when you inhaled,

and failed to exhale, I cried,

you never witnessed me,

So now, your legacy runs

deep within my cells, a pattern

on repeat; my daughters dressed

in purple and blue angst,

I knew before he came, wide-striped stalwart dragon breathing me.

I dreamed him in my bed, in my shower, at the gas pump, eons ago,

a new mom, old wife, frigid, estranged, but there he was, faceless.

And when he spoke my name, behind the bush, at the hotel, I shuddered.

Shut. down. So that’s what I look like, that’s the rod and reel bait. Me.

I had to love his strength, muscle-bound black and white lines, like

Does everyone truly love a fascist, twisted up, tied down in a cliche?

Ten years gone, a heyday of sorts, of sordid pause, a shadow in relief,

Who said a woman must have everything, in adamantine chords, chained

to the sound of her own voice? Watch out for wishes. They may drown you.

Like smoke, drink, coke, a bite of your nails to the nub, habits stain passion.

We fold ourselves one into another, unravel and curl up in slaughtered sleep.

I’m a diver. I can’t swim, but I can float. The thrill of the leap tempts me,

when you stare down death in an air bubble, tip of the nose, fourth eye.

And when you break the surface, you can breathe in the banal with relief.

My lonely habit, soft spectral contrail, I long to touch, until my fingertips

crush beneath your palm, captive tears, dying to free, me, to the river’s edge.

First you preheat your oven at 180 degrees, an about-face from everything you knew and took for granted.

Let it sit for a month or two, the year’s just begun.

Then you take a large mixing bowl, scramble up a few rumors, official statements, hearsay, and news,

Do weird shit, like hoard toilet paper and hand sanitizer, run your shopping cart into a ditch, shun your neighbors, haunt social media for a lifeline.

Letting your foundation set, whipped into frenzy, a chiffon of meringue madness, abide for a bit, see what the experts say, zoom a toast at 8 o’clock to fellow basted mates.

Sink into the sofa, smoke a blunt, drive by a friend’s house, congratulate her graduate with a honk and a sign, “Class of 2020!” and resign.

Help is on its way.

Don’t bake the idea too long, though, keep it in the oven past your last dollar, because you’ll falter, trip, sweat a few

confectioner’s sweets into your keyboard and blow your connection.

Better you sift through a conspiracy or two, topping for the frenzied mass you made, sitting on the kitchen table,

unmasked, dreamed, driven by fear, denial at its best, deign a madman’s folly, char your friends; hey, hang your

Simmer what you want.

Eat your just desserts–you made it.

We’ll all be demanding a bigger piece of the pie–not the one you baked, though.

She, who never says an untoward word, thinks an unkind thought,

surprised me with her assessment:

“You have deep humility, accepting anyone without judgment. Sure,

you’re a little sad but that makes you relatable.”

Me, a proud woman who judges the ants that dare to walk beneath me,

the husband who falters at my hands, the children

I bore, through no fault of their own, and the world, belching forth steam,

storm and dung, that dangles on a thread at God’s fingertips, I laughed.

A teacher, business woman, President of the governing body of

all bodies, my body, those of my clients, friends, and students,

heart of my income, soul of my future, guru, acharya, spiritual grift,

I pay in sweat and sacrifice for a sideways glance, enlightened lint.

Pam Gerber here. This is my second or third marathon, maybe one was a half, not sure, maybe this is my fourth, but I am thrilled and anxious about arising a short 7 or so hours from now to begin. It was challenging but creatively exhilarating before.

I live in Huntington Beach, California, and teach writing at the local community college, teach yoga, and write for legal publishers and various sites. I have been on lock down with my housemates, my husband, two adult daughters, 86 year old father, Husky pup and Japanese Bobtail kitty. It’s been an adventure. Since my father is at-risk, we stay home.

Lock down has prepared me for this marathon. I sit around and write all day anyhow, punctuated by zoom meetings and classes. I’ve grown to love the slower pace and domesticity. Not sure how I’ll do on the sleeplessness, but raising children and surviving menopause has prepared me for sleepless nights too 🙂

I look forward to reading all the lovely poems in store for us!

Though the shades are closed, vertical blinds obscuring the view,
I well know what lies behind them.
Out there, in my yard, lives
A grand Valencia orange tree 35 years old or more
That branches from the house to wall in a triangular
Patch of dirt amidst the concrete.
And kitty corner is the tangerine tree, frailer than her
Companion citrus tree but her fruit is sweeter.
She’s younger than her cousin.
In the southwestern corner of the yard are the rose bushes
One tall white rosed tree and one red sickly
She may suffer disease or rot, maybe bugs
And in the corner in the deep recess of abutting walls
Reigns the queen ficus, wild, unruly, with bursting roots
Uprooting everything in her way, concrete, cinder, and earth.
She buries bird nests and Edison wires within her bushy hair
Along the wall between the tangerine and lemon tree
Live a tangle of tomato plants, beefsteaks, cherries, and romas
Overrun nearly, by champagne grape vines grown over
And under my window, sentries to the morning, two small trees
That bloom pink peonies, peppering green leaves.
Beneath them, in the cool dirt, lies the Husky pup, Goosey Loose.
Who’ll soon lift herself on sleepy legs to crawl through
The doggie door, pause at the entryway before hopping into bed with me.