Daddy left on a cold and harsh day.

Susie left us on a cool and dry day.

It feels unreal, as if we do not exist, anymore.

To explain his fact of life called death.

Daddy was expected to some degree.

I once saw her … a vision in an old woman on the train.

It was Susie, if she were in her seventies.

She was wrinkled, only a bit.

The woman on the train.

When Susie, only 17 years was diagnosed with cancer…

Under her left eye …

She had the same thing at age 5.

… a look that children with cancer get.

A knowing or maturity…we cannot understand.

As they are brave souls … old souls,

before they are old.

Daddy was old forever, of course.

But when the cancer came …

he got older, still.

at least, the terminal kind.

The face gets grayish.

Or, eventually, letting go of this lifetime.

Then, just this one day, in August. Ideally, and suddenly.

There was light! From them who had crossed?

They lead me to him. Alive, healthy!

He danced and he sang for me!

He did not know it was for me …

He came out, with life in his step!

He was fast and the air was on fire …

His forward motion was quick . . .

I pushed myself off the wall, holding me up!

And I intercepted him in the middle of the room.

When he grabbed me

That hard grab was strong

…yet gentle at the right moment.

Passionate and held me up,

as I swooned in him embrace. 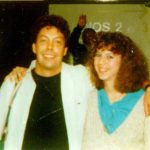 NOTE: In 1987 my father died on February 4th, and my young friend, Susie died in November. As Susie was on her  death bed — on August 28th — I met my favorite actor, Tim Curry. This is the actual photograph.