Cut open, tear. Bleed from magic inkwells
Stare. The window’s pane is a television screen;
what you see outside is not actually happening.

The president is trustworthy
The police are protecting you
The children are safe.
Remember to giggle a little
if anyone tries to tell you differently.

The information that confirms your own beliefs
is a veil thickened by the media scenes,
biasedly depicting the facts as conspiracy
blurring the line between truth and honesty,
magnifying the delusion you choose to fit your understanding.

But If you have found yourself living in a world
you no longer recognize, trust your eyes
because reality has become that alarming.

America, America, it is of thee I sing. Home of the brave, sold out
land of the free. Our country is being stolen by the
freedom of corporate capital, the freedom to violate the earth
for quick fortune, future generations forfeiting their inheritance,
permanently desecrated by the oil tycoons greed.

The freedom to exploit another human being
because he can’t read the fine print, or afford a lawyer
to interpret the endless legal jargon, or because he is
so desperate he skips meals to feed his children,
the freedom to take him for all he’s got because
he would sell his soul to fill their hungry bellies.

Power is only gained, taken, and kept through the threat
and direct use of force. An uncomfortable truth,
they don’t teach you directly in school, but if you read between the lines,
of the one-sided lies in the World History textbooks,
a common theme holds thread through to today,
just as it did at the dawn of civilization:
Power is assured through violence.

The powerful only fear violence, because in a world ruled by money,
they are the untouchables gods of industry, but everyone can bleed.
And it is only when they are personally confronted with death,
do they see that life has no price. It is only when their hands are holding
the ebbing spill of their entrails, they finally realize the frail impermanence
of monetary luxury. As we consume, so too are we consumed,
for there is no liberty for the cogs in the machine.

So when you see nationalism, bigotry, racial pride, police forces being
used to protect the investment interests of the wealthy, stand up! Make a fist!
Resistance requires mass.

The most potent emotion I can recall
from my childhood is a feeling of needing
something I could not explain. I have countless
memories of pestering my mother in the living room
of our home, complaining that “I’m bored,” and
“I want to do something.”

My mother usually encouraged me to be
constructive at first, such as finishing my share
of the housework, which I often neglected.
She knew this wouldn’t work, it wasn’t what I was after,
but still, she felt motherly enough to remind me.

After this option was shot down,
she would canter through a list of activities: drawing,
playing outside, reading; all of which sounded unappealing,
and still, my dissatisfaction would fester
like an ache I could not mend, an unmet need
I couldn’t understand at the time.

I saw a grey squirrel scampering
up a sweet gum tree with a plastic
yogurt cup clenched between his teeth.
disgusted by how our waste harms
the wildlife we share space with,
I thought to take a picture with my phone,
so that I could post in on my social media feed
and publicly shame fellow members of my species.
But the squirrel, delighted to satiate his hunger,
did not want to pose for me, and I had to interrupt
my three-year-old’s piggyback ride to even get to my phone,
which didn’t make him happy,
and I lost the squirrel somewhere above
the overlapping branches.

The swell of my heart is a pale fragility
passing for life found quiet
beneath a gently nestled river stone.
Accompanied by my subterranean neighbors
infected with less than aesthetic features:
spineless, many-legged, permeable skin.
Lowly inhabitants to keep
my lonely heart company.

How dare she lift that stone,
so perfectly were we
in the mud and wet earth,
I, my heart, the worms, and the dirt.

She, bringing sunshine and oxygen
making my woodlice friends scramble for cover.
And me, stumbling blindsided by her light,
with an idiot’s stare,
too ignorant to follow my friends,
too dumb to know when to run.
Baffled by her strange glow.

*But as if a magic lantern threw the nerves in patterns on a screen:
Would our story be one worth watching? The interplay of hearts
struggling to pull some meaning from the love they gave away.

Then coming together again, years after the war had receded,
to find that same spark which ignited a lifetime together.
Oh, what sweet day, to fall helpless at love’s unveiling.
To arrive once again, at the beginning
with a heart folded like tempered steel, reopened to its core,
laid bare so that its soft center may
be strummed by her familiar touch.

A three-year-old shivers unbeknownst
to what is causing his body to spasm involuntarily.
The horrors of the sad, clown-faced parents
exhausted, humorless, their internalized torture
exudes an aura that suffocates the pale, tremored
waters of the hospital room.

Sitting alone in shadowed corners
feeling the weight of a marriage dissolve
as worry for our small child lingers over
the dull cadence of a heart monitor’s finite calculations.
Waiting to hear but nothing is ever promised.
The sway of information, up and down,
we cling to any bit of hope offered.
Bargaining the entire world away to save one life
to see you safe…
our child.

An entire class of walking portraits,
emerging selves eclipsed by worried dreams
shuffling through illusionary thresholds,
initiated by the anxiety of insecure authority
governing by mandate
while still teaching through sleepless hearts.

A world of wild dreams chase you,
untouched and promising, your lips speak of a
relevance somewhere between the safety of naivety
and the dark truth of responsibility.

Structured learning taught you to function as a mass
within a system that produces the individual as a part of the whole.
How much will you rise above the rest? Or how far will you fall from where you stand?
It’s up to you now, anything more you want from the world
has to begin with your efforts. It won’t merely be provided.
No one is entitled to care about your feelings,
or to listen to what you think. If you want those
relationships you have to cultivate them.

Create your path, or life has a way of creating it for you.
But wouldn’t you rather choose it?

Cataclysmic cloud of color,
of racing people rushing
through the pulse of a passing moment.

She escapes them all by
claiming stillness at the center for herself.

The turn of their bodies become
elongated brushstrokes,
the luminescent details of petaled flora
in a breathing oil painting.

From within her garden of cosmic fire,
she renders the strange world, safe. 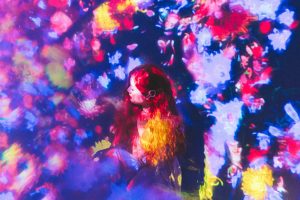 Chasing the sunrise,
Timelapse lost, hurled into the future,
Half a day away, spinning around
a turning world,
I’ve come to inherit dreams,
swelling mythology,
indulge in food and fantasy.

Adventure in every unknown minute,
in every glancing eye and stranger met
lies the happenstance of impossibility.
Encounters never meant to be,
connections laid bare,
vulnerable to exotic temptation,
I celebrate the strange parade
of exalting human indulgence.

The whole of the world is a swelling daydream,
a gradual infection festering in
self-sought hypocrisy. Bleeding shadows
from behind your eyes, tasting rain-like teardrop
stones caught in your throat. Your voice a silent
cascade of sunset colors, dreaming of the wild
afternoon where trees shimmer in the heat,
a purple sweating craze wiped from your brow.

Do you hear the fox’s gagged voice,
choking ancient words amid the tall grass?
Shades striping, umber eyelids drawn,
whispering in a demonic tongue
a savage song just beneath the canopy.

Can you feel the hungry insects? Chiming in eternal
patience, abundance triumphing over minuscule lifespans,
giving purpose to all that is discarded, hordes chanting,
heralding the incoming dark, giving voice to the trees,
crying with the worms to taste the wasteless.

A seething undertow is coiling
through branching veins, ascending inside
climbing trees, and spilling over objecting
stones of forking tributaries.

Shrinking dusk, crawling beneath growing shadows,
a fading wound in the skin of night, a watching moon,
pale enchanted majesty, swooning divine reverie
in the waters of my being.