so i watch the birds
from my rear window
avoiding vertigo
yet when the wind
is southerly
i know a hawk
from a heron, sure 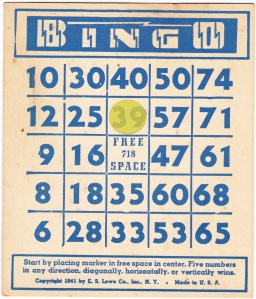 Oh man, so it turns out, despite everything, I still got my times wrong & it started an hour earlier than my foolish brain had convinced itself. So I’m already an behind the bingo ball. Story of my life.

Anyhoo, first number drawn was 41. & I groaned when I saw it.

They go only get better right. Let’s hope so.

Some years again while researching rhyming slang, I stumbled across a couple of pages of bingo calls. No doubt you’d recognise some of ’em if you heard ’em (#11 — legs eleven, #22 — two ducks swimming, #88 — two fat ladies, et cetera).

Although I have never played bingo, nor it must be said, had any great desire to ever play bingo, I was fascinated by the language used. Right then & then I felt this could be an interesting area for poetic exploration; & like so many of my ‘wonderful’ ideas, there it remained. Though it did get a title and a folder on my desktop, as well as saving a few PDF’s of calls as I came across them, essentially it sat there, sad, lonely & unloved. (Who says ideas take after their poets.)

Until I read about the 24 hour write one poem-per-hour marathon!

At last I thought, a chance to see if BINGOLINGO had any chance of growing into a chapbook, or at the very least, a winning 5 poem suite of bingo!

To this end, in preparation over the past week, I have collated all the calls I have found into an excel document & printed them, cut them into little pieces, folded them & placed them in my Slash/Circus Ringmaster’s Hat-cum-Bingo Cage. (NB I have used the Australian/British system of 90 numbers, rather than the American 75, not because I want the extra numbers, but simply cos I want the chance to get the politically incorrect #88. 75 would be so much better because i) there’s less & b) at the end of the day I’d have written poems for at least a third of the calls! But art isn’t always about what is neatest…)

Web articles tell me bingo houses in Oz are phasing out cliches such as “two fat ladies” and “#69 dinner for two” to try to modernise the game and attract new players.  “Our current day bingo players only want the next number to be called, not a whole lot of fuss with terms and sayings” which I think is sad (let me reiterate, I don’t play the game, & have no desire to play the game, so my grief on this matter is pretty moot). None-the-less, cue gareth to the rescue.

The rules/guidelines for my personal 24 poems in 24 hours madness are as follows:

I will draw out one number at the top of each hour. That will be my poem’s “subject matter” for that hour. With it I can do one of the following…

1. Rhyme.
Write a poem with a formal rhyming style (owing to the rhyming slang nature of so many of the calls) – limericks I think might be featured heavily in this category.

2. Suitcase.
Taking one of the calls & “unpacking it” (I hate that phrase — originally I used bomb/blowing the poem up imagery, but that just wasn’t quite right), i.e., say I draw #11 “legs eleven”, I write a poem about a character with eleven legs, or in which eleven legs are featured. Make sense? I might also research the call, see if I can find out why say, #30 is known as a Burlington Bertie (turns out it’s a music hall song composed by Harry B. Norris in 1900 and sung by Vesta Tilley. Parodied in the now-much-better-known “Burlington Bertie from Bow” [1915] ). Any of which might become Gedichtfodder (as the Germans call it) — though for the life of me I can’t quite see how. Seriously, what the hell am I getting into?

3. Stream.
A much more “stream-of-consciousness”/word association style of poem. In these poems, it is my aim/intention to include as many of the calls as possible (i.e., I have found 8 different calls for the #8. In a stream poem, I’d aim to include all 8 somehow); or, perhaps even more fun, take some of the crazy calls & see where they lead — to see how I can fit “cock & hen”, “uncle Ben” & “Prime Minister’s Den” into one poem. I’m hoping this may even in turn lead to my very own new, invented calls.

4. Picturebook.
As many of the higher numbers have limited calls available to them [& often rather bland ones at that, big numbers that end in 7 often relate — somewhat weirdly, to heaven, haven’t figured out why — or those starting with 7 become lucky one, lucky two, etc (‘lucky’ being a call for #7 itself) ] anyhow, be that all as it may, if I find myself truly truly stuck on a big one (or just find myself at 4am staring at a blank screen desert) I’m going to allow myself an out. (This is meant to be creative exercise after all, not a self-inflicted torture sesh.) That ‘out’ is one I often use to find inspiration for writing — that of going to one of my favourite artist websites (like deviantart) & type in that hour’s number or its call & see if there are any artworks which come up/use it as a title/theme, which I can then draw from. Ergo, any resultant poem might only have tangential or surreal connections to its originating call.

I’m going to allow myself three wild balls (numbers), wherein if I am really struggling to complete a poem of sufficient quality (& I use the term loosely given the time constraints of this competition 🙂 ) I can, once 30 minutes has elapsed, draw a replacement ball (number) & try to complete a poem based on this new ball (number) in the final half an hour. At the end of the hour, I shall choose whichever ball (number) generated the best poem & post that.

I think I understand what I’m gonna do, at least, which is probably the most important thing.

Also, part of me is hoping that some of these poems will be fun & ‘kid friendly’ – obviously not one’s with slightly more, built-in nuendo, but I believe, some of the funny rhyming phrases have the potential to appeal to young poetry connoisseurs.

& finally finally, if it turns out this whole idea is nothing more than a ridiculous exercise in futility/pretension/stupidity, I am going to all myself the freedom to abandon BINGOLINGO altogether & just aim to write a poem an hour on ANY topic for the remaining hours rather than give up on the marathon altogether.

& so, the countdown has begun. Don’t bother calling me for the next 8-10 hours, cos I’m going back to bed so I’m rested up for my 24 hours of NumberCalling, PoemCrunching, JackpotHitting, SeniorCitizenImpersonating MarathonMadness.

NB – folks are welcome to call me at 10.55 just to make sure I’m awake 😀
NB2 – guests welcome to visit on the hour to draw the next number, but then you have to sod off while I write (unless you bring food)…

It came about in the following fashion:

Mike Hopkins, well-known local SA sadist (& masochist — he runs marathons for real; like, non-on-the-couch ones) shared a link on Facebook with a couple of his cohorts who seem to think writing a poem a day for a month is something one does for pleasure. (NaPoWriMo)

MH: You game for this?

TK: good god, MH…we really do like to make poetry either a blood sport or an endurance event….why can’t we all just sip tea and scratch out the occasional, romantic villanelle???

MH: No discipline, that’s my problem. If I haven’t got a deadline or a challenge, I just vegetate.

grj: I’m willing to give it a crack…

grj: That’s madness. But let’s see how far we get
grj: PS (I then posted a screen cap of my application)

MH: Yeah I s’pose you’re right, maybe next year but great to see that you’re committed to it. Look forward to your 24 poems

I must confess, I have a specific project in mind which I’ve been wanting to do for a while — but never made the time for it.

I think this will make the job of cranking out 24 poems in a day considerably easier. Or a total nightmare if it doesn’t work out.