EXTRA EXTRA READ ALL ABOUT IT

Ink on paper soon could be

May soon no longer be the norm

On a screen you’ll need to look

When you long to read a book

He trusts me, even when he fears for my well being

He compliments me, even when the dinner ends up in the trash or the new hair cut is just a little “iffy”

He helps me, even when he knows I should do it on my own and it means more work for him

He supports me when life gets in the way

He challenges me, knowing it might make me mad, but he knows I need that challenge

He gets me, even when he doesn’t fully understand and I would guess that is quite often

He is there for me in every way imaginable…..every hour, every day without fail, forever.  How could someone care so much, so deeply?

My hope is that he feels the same about me.

Hour 15 (a prompt from Write The Story book.  Mash up two classic fairy tales.  I’m starting to get a little punchy)

She headed out with her basket of goodies and treats

Some things for her dear sick grandmother to eat.

She hummed and she skipped down the path through the wood

Her basket in hand, wearing her bright red capped hood

Up ahead were two kids looking lost and alone

She felt she could help them, try to find their way home

Being lost made them hungry, would Red Riding Hood share

They could dine at her grandma’s, they were almost there

She agreed to oblige them upon their arrival

For she knew that nutrition is a key to survival

They hustled along til they spotted some trouble

They both started drooling, with lunch on their mind

Whispering to one another, they figured a way

To reach Red’s dear grandmas without much delay

Up ahead was a house made of candy and sweets

Made to entice those three youngsters to stop in and eat

They knew it was part of the witches attack

To lure them in with her plentiful snacks

They’d end up as dinner for the evil old witch

Now was the time to feed her their pitch

They called out to the witch and they convincingly lied

About wanting to rest could they please come inside

The witch and the wolf yelled back, please be our guests

Come in and sit down and let us do the rest

The witch and the wolf ran ahead with delight

The kettle on the fire was already a boil

Gretel managed to pick up a hand full of sand

They watched for the signal from Red Riding Hood’s hand

They backed up the witch and the wolf with the foil

The deed had been done, they were free from that fate

They could head on to grandmas, before it got late

Red Riding Hood made Hansel and Gretel a vow

That she’d get them home some way, some how

Grandmas house soon was filled with good food and much laughter

And you know the rest……they lived happily after.

Giving their talent and time

We reap their kindness

THE TIME IS AT HAND

A wrote a poem

The second was worse.

With a thought or a notion.

Maybe a drink from

One drink leads to two

Before you know it, its four.

And you discover its hard

To type on the floor.

You jump in the shower

Hope to come to your senses.

And get back to writing

Using all the right tenses.

Out of nowhere I’m getting

A feeling of power.

I hope I can make it

I think I can make it

If I stop with this rhyme.

And get back to attempting

And complete this great marathon

Hour 12 (Marathon Prompt – Pick a random book from the shelf.  Read the first line and the last line.  Pick one and use every word of that line somewhere in your poem.)

The Book:  A Million Little Pieces

First Line:  I wake to the drone of an airplane engine and the feeling of something warm dripping down my chin.

Above the clouds in record time

Final instructions drone on and on

We’ll soon jump out and then be gone

I’m at the edge and looking down

And the feeling of something going wrong

Which once was not, but now seems strong

I closed my eyes and felt a push

Plummeting down I felt a swoosh

My eyes now open staring up

To discover my chute was not hooked up

Desperately I tried to yell

I’m ‘bout to die…oh my what hell

Something warm came dripping down

As I came closer to the ground

I wake to find myself a fool

My chin was wet from sleeping drool

Just a dream, a nightmare really

Hour 11 (Marathon Prompt – write about a place, real or fictional, that you have never been. I am using the acrostic poem style)

I      Individuals see no need to fight

N     Nice and neighborly together we

E     Erase the hate and let peace be

S     Seize each day and heed its call

C   Cause when we act for the better good

O    Our lives seem happier as they should

R    Rewarded for our better ways

N    Nurtured in us every day 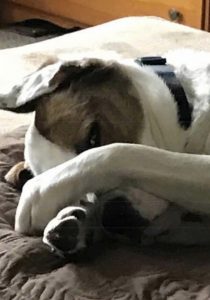 Hour 10 (Marathon Prompt – listen to the song Moon Shadow by Cat Stevens and start writing as soon as the song is over.  Some of you know, maybe not all of you, that we have a dog that we named Cat Stevens.  Second ironic twist of the day!!)

You came to us humbled and blessed

Rescued by Shauna and readied for your new home.

“Did it take long to find me, I asked the faithful light.”

Out of the Christmas box you popped

But he would not relinquish his dominance.

You would always be second while he was around.

For those who are grateful, the journey is a kinder reward.  Let us learn from them.

The heat of midday faded

as the brilliant summer sun

settled below the tree line.

who earlier zoomed about the cottage

Had he succumbed from the heat of the day

or did he drink too much of the sweet nectar

for our visiting hummingbirds?

Masked in his gluttony

his attempt to entertain us with dance and flight

landed him in the campfire.

LOLLY THE CLOWN COMES TO TOWN

(Disclaimer:  I performed as Lolly the Clown for over 20 years.  My friend Kim said this would be a good topic to write about.  Oddly enough today, our neighbor gave my husband a ceramic clown to give to me.  His wife had collected them when she was living.  When the universe gives you a sign, you gotta’ go with it!  So humor me on this one……lots of silliness!)

The assignment from Mr. Daniels

To write about our futures

But we were barely teenagers

Oh what was I to write about

I didn’t have a clue.

Would fill up pages fast

An idea had came at last.

I would write about a professional

That once a year would come to town

As a performer in the circus….that’s right

I wrote about my floppy shoes,

And whoopee cushions too.

I wrote about my big red nose

And all the magic I would do.

The words were flowing easily

Each page was quickly filled.

Before I knew it, I was done

Which had me really thrilled.

I kept the paper, got an A

Then years later down the road.

I found the paper, and thought about

This seed I must have sowed.

I took a class at OSU

Needless to say, a lot of play

I really had some fun.

I learned some tricks and make-up skills

And how to twist balloons.

Learned all about the types of clowns

From white face to ole buffoons.

Purple was my shade.

When all the work was said and done

I liked what I had made.

Would impact my life for years.

Lolly the Clown had come to town

Though my floppy shoes and sponge ball nose

Are now all packed away.

Lolly will be, a part of me

Until my dying day.

On a side note:  I decided to be buried in my clown make up so it will be easier for the funeral home to get the make up right!!