I’m very pleased to be participating in my third full Poetry Marathon!

I fell in love with this concept as soon as I heard of it in 2017 and excitedly joined just a few weeks before the launch date. I missed the 2019 Marathon, but participated again in 2020, a few months before my doctors diagnosed me with papillary thyroid cancer. Having missed last year’s event because of low energy and recovery from surgery, I’m extremely glad to join in the challenge this year.

Writing is different for me after facing my mortality, as so many do when they receive a cancer diagnosis. It’s more important than ever to find, speak, and write my truth, even and especially when it’s hard to do so; but I realized that this sometimes leads to unfinished writing due to perfectionism.

This is where I find The Poetry Marathon helps me most, for, in this challenge, I must write, even if it’s hard, even if the rhythms and rhymes aren’t perfect, and I must go on to the next poem, even when I’ve not completely grasped the message I wish to iterate in the last.

As we near the sixth prompt, I find I’m already proud of the work that I’m creating; and the challenge is inspiring me to push myself even in my fiction and nonfiction writing, once this is through.

Thank you to those who are responsible for this event, and thank you all for participating, since it keeps the momentum going. I made a few lasting friendships in the last events and hope to make more through this one — so, if you wish to reach out, please do!

Good luck to everyone!

The only gift I ever wanted came to me,
The only thing I’ve ever wanted, since I was three
When all I ever wanted was to be
Happily married
To, exactly, only and both: Brad and Dee

It’s fine.
It’s all just fine-and-dandy, now.
And you can keep on chewing cud with that heifer you call a cow
(And I don’t mean that girl you’re sleeping with these days
I haven’t anything against her; and you’re just living in a haze
Deceit is worst, you know, when you turn it on yourself
But that’s for me to know and you to find in some book upon your shelf)

It’s FINE, I said, because, you know that guy across the way?
No, not that way; the other way – I met him twice the other day
And twice again the next morning, twice in the afternoon
‘Cause he kept on showing up with the clockwork of the moon
Everything HE did, he said to me he’d do
And there he was, sure-as-shock and true as true is true

It’s fine; he’s fine; we’re fine; I’m fine
And all is right-as-rain
I’ll catch up with you another time
I’m seeing him again

And every time I see him, it’s his mind I treasure more
For that, alone, is all I wished to even up the score
Somehow, he’s just the type of guy to open up my door
(A bit my dad would be proud of, it’s his favorite romantic lore)

And, though I never wanted for gifts of pretty rings
He hunts in every shop we pass for jewelry and things
He tells me: What he wants for me is that I’ll always know
His heart is mine forever (this he says with eyes aglow)
And never must I worry that his mind is true, as well
For, he says, I’m astounding and without me, he’s in hell

Isn’t it the strangest thing, to find one’s counterpart?
I’d be scared – except, with him, I can’t but spill my heart
And every word I speak to him, and every word I write
Is naught but merriment to him, perfection and delight

It started with the smallest thing: We each said what we felt
And all protections fell away while hearts and minds together melt.

He looked out, across the ocean
Beyond the crashing waves
For long, silent minutes
While the gulls cried around him

Oranges, gold and crimson bled
From broad bands of sky to sea
But it wasn’t that he’d come for 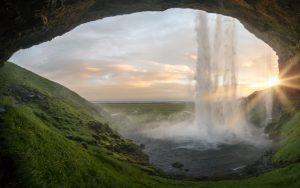 Beyond the farthest meadow,
In the center of a hill,
There rests a quiet burrow
Behind an ice flow, never still

And in that ice-cold grotto,
One can find – from time-to-time,
A tiny pixie winnow
While she bathes with wild thyme

‘Hallu, kallay, newcomer,’
She greets with words her own
‘I’m seeking out a drummer
Who can sing in baritone,’

Her voice trills into laughter
Filled with honey-sweet appeal
When she finds your eyes lech after
Her shape, so perfectly surreal

‘Or, perhaps you’d be a crafter
Who might make a ring f’r me?
Since, if it’s me y’ur heart’s sought after
You’d best know how to shrink y’ur key!’

“Are you still awake, darling?”

“Do you want coffee or a cup of tea?”

“Do you want me to stay up with you?”

I looked up from the laptop and stared at him, startled and stunned.
“You… would do that?”

…Perhaps I’m lucky I don’t have one
And I have to find a spark,
A match,
A candle,
An electric torch.

Sitting here in near-darkness, all alone,
I’m forced to find my own lights, yet again;
To brighten up this room and my soul –
Since it’s not very many who are reaching towards me,
Not so many who can stand the wattage of my electricity.

It’s best this way, Plato said:
Just leave them where they sit
While they watch shadows move and play,
Believe that’s all to it.

Perhaps I’m lucky, after all,
Since my blaze would shine so bright
Particularly when the world-at-large
Is stuck so often in eternal night

Better, perhaps to keep my eyes attuned,
Better, maybe, to learn how they move

That I can find my way around
Be safe, as so many others do.

This explains, though, I think
Why I’ve been drawn to Flames

(It’s that…
Or, perhaps, it’s my phoenix-like claims)

Always paid attention to her studies?
Never had time for white rabbits carrying pocket-watches and white kid gloves?
Never knew that Dinah was more than just a cat?

What if Alice never wondered what might be down rabbit-holes or beyond mirrors?
Would the Kings and Queens be any happier?
Would the Mad Hatter and March Hare have lost their hallowed heads?

I wonder if she would have wound up marrying a troll
And, if she married one, would not-curious Alice even know?

I can’t help but wonder if she might have wound up like I:
Curious still, but curiously-held by absolutely-nothing in our minds

The silence of the morning was my favorite thing
Then, the glitter of white fairy-lights sparkling upon the tree
The plethora of gifts spilling out far into the room
Assured me all was well with Dad and Mom, who were up late, playing Santa

Fat stockings hung upon the mantle
Each tagged for us to find
And all I wanted, through my youth
Was this quiet, alone-time

The best part of this Christmas morn
Was knowing we would see
Mom sitting, tired, in a chair
And Dad beside the tree

He was almost sad, when he would find he’d reached the last few gifts
And I was sad to know, each time, how far from them I must have drifted
It wasn’t that I wanted much
It wasn’t that I was greedy
But every box I opened was the reinforced belief
That even here, amidst a family so large, I was only known by Stacey

I’d set aside the boxes and help clean up all the wrappings
Relinquish my joy to Christmas lunch, with the expected trappings
Cheese and crackers, nuts, preserves and vegetables galore
All my favorite foods and snacks I could munch on and adore
While in the family room, all day, Dad played his favorite Christmas songs
And all I wanted in the world was Dad’s presence, all day long

I didn’t want to feel so much;
And, maybe, it’s imagined, construed
But it’s something to have a thought jump to mind
And it isn’t, by far, the only time.

I feel easily, it’s true;
And I’ve been hurt so recently
That maybe I’m latching on
Because you’re gentle, kind to me?

Dare I tame it, call it ‘friendship,’ first?
Withdraw my attraction; place it in chains?
I might drive emotions from bad to worse
If I do or I don’t grab hold of those reigns….

In truth, I love spending time with you,
If this is who you truly are;
I love the work, the story,
And am intrigued by the one whom I imagine.

I resonate with the words that spill forth
From wherever in the world you are;
It takes a rare and empathic person
To formulate such thoughts.

I thrill that you’re an artist, finely-honed
And magical in your ways –

I’m grateful that you’re now so often there;
That I’m not alone in this.
And I know it’s likely only this COVID isolation
That has allowed for time, like this.

Write to me of most anything
(Now, there’s an old idea) –
It’s surprising to me what has become

Because I thought I sensed something else, at first –
And honestly? I’m still unsure whether to believe or not
But here I am, in the early morn, blushing so hard, it hurts.

And you don’t even know that I have this sudden thought of you –
Unless you’ve picked up on this fact in the last day or few –
But, it’s easy to feel for someone who is real
And so easy for me to accept whatever I may feel:

It’s is a gift, not a demand, of course –
A statement of value, not a challenge of force.

The scent of your hair is intoxicating,
The sound of your laugh makes me giddy with joy,
But it’s your mind, when you’re working
And your creative sparks that make me a child at Christmas with toys.

The taste of your lips on mine is all that it takes to bring me to my knees;
The caress of your fingers upon my cheek just sets my mind at ease.

I swear, if it was possible, I’d kiss you all the time;
And anywhere that we could go, I’d have your hand with mine.

The others could make fun of us; I just don’t give a damn,
Because, if you would trust in me, I’d give you all I am.

There’s not a second I could spend without a thought of you,
Because there’s nothing that you are and nothing you could do
That isn’t bliss and magical to an active mind like mine –
And all I’d ask is your kiss to rule my heart and time.

Just one more thing that I would ask, and not a trifle more:
With deep respect and utter passion, please pin me to the door –
Or find, with me, a breathless gasp while I lay upon the bed,
Remind me of your heart, I plead, ’til I cannot doubt this watershed.