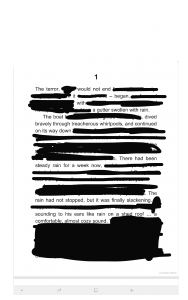 Let’s get down to business shall we?

It doesn’t look good, you look like a pretentious maggot,

We both know you’re only one of those,

Stop crying out “I know! Miss I know the answer”

It was a rhetorical question, you chancer,

And when you get something wrong,

Don’t cry, please don’t , you look like such a fool,

Don’t even get me started on the swimming pool,

Nobody likes it when you act so condescending,

Your massive ego is never-ending,

You just expect everything to go your way,

It won’t, so please just stop,

And grow the hell up

And I know this is cruel,

The bus stops beside the concrete footpath,

The rain thunders down on the grumpy teens,

Who were forced out of bed at 7 a.m. by their damn alarms,

The town has been engulfed by a thick fog,

The weather warning was the first thing I saw this morning

I get off, my school shoes immediately absorb the water,

I let out a low grumble, sipping my coffee,

At least my day can’t get any worse,

I text my friends first,

Tell them to save me a seat in the canteen,

He was everything to her,

Her sun and moon,

The first one she called when something went wrong,

Her strings of sanity began to unravel,

Revenge rang in her head,

She used everything in her,

To destroy what had taken everything from her,

When he died, she became undone

She loved the morning sun,

Going out at night, and the open mic,

Violins and the orchestra

But what they both had in common, was that they were meant to be together

He walked through the cornfields,

His hand grazng the tall crop,

He pulled his cap down, shielding his eyes from the sun,

Had been born weak and sickly,

He had lived through fifteen winters,

He understood nothing lasts for ever, but that didn’t make him any less distraught,

He had woken before his mother,

so that he could clear his mind,

And prepare for the sorrow that was yet to come,

He heard a wail come from the house,

He ran towards the stone brick farmhouse,

He burst through the door to the kitchen,

His whole family was there,

Crowded around their mother,

She crying, craddling the empty shell of his brother,

Maura was comforting her, but the tears were running down her cheeks too,

His father lingered in the back,

Purple bags under his eyes,

He felt something ignite inside him,

A deep sense of mourning,

He had been expecting this,

But seeing his brother, Fern, an empty shell,

He would neverr get to talk, or walk, never feel the thrill that was life,

Three days of prayers and tears,

Or pain and misery,

He could rest now, Fern could finally breathe easy,

He wrapped his arms around Maura,

Trying not to look at the bundle of clothes that covered his brother,

I’m trapped in this cell of my own making,

The walls all around me make me want to cry,

I can’t leave, I made this cell for myself,

And I’ve lost the key,

It’s so dark in here, so empty,

I feel so lonely and trapped,

I think I could get out, if I tried

But I’m scared of what might happen if I leave,

So I stay here,

Trapped in a cell of my own making

Startled and confused, I rose out of bed,

He rolled his eyes, “School dummy!”

I stared at him in horror,

I walked downstairs, to the kitchen,

and made myself a coffee,

But I didn’t drink it, instead I fell asleep standing up,

I awoke outside and in a daze,

To hear an engine call out my name?

Bewildered, I looked out my front gate,

And sure enough it was my bus driving away

But it drove away without me,

Until it was just a green dot on the road,

I heard a faint meowing from behind me,

I looked over my shoulder,

It was my cat!

But it’s eyes were huge,

And it was stuck in a slinky,

I had to get him out!

I rushed over to him,

But he shrieked and ran away,

He ran out onto the road,

And I chased after him,

Remembering that I was still in my PJ’s,

He stopped, and stared at me,

I picked him up and scolded him,

But the sound of a horn, caused me to almost drop him,

Her wings felt papery in the wind,

Her eyes dotted by black,

She had never felt such a ravenous hunger,

Any minute she would pass out,

Her wings would stop,

And slowly she would fall to the ground,

The harsh winds threw themselves against her,

And she struggled to stay aflight,

As she navigated the dark forest,

But then, when it looked as if all hope was lost,

She had come to a clearing,

A place where the trees came to an end, and the darkness evaporates

In front of her, in the middle of the clearing,

Was a house, surrounded by a white picket fence,

And she smelt something sweet coming from behind that picket fence,

Her stomach gasped at the smell,

And she was drawn to it,

She flew over the fence, and into the garden, in a daze,

Then, she spotted a bench,

And on it, slices of beautiful, orange fruit,

She could almost taste it’s sweet flesh, and she had to have some,

She spotted a chunky slice near the edge of the bench,

There were others there too,

But she couldn’t care less,

She dive down to the slice,

She placed her lips on it,

And, savoury every drop, she drank,

The juice filled her up,

After a while she stopped,

For the first time in a long time, she was full

I walk through the fields outside my house,

Listening to some old Queen track,

I stop at the stream,

Watching the water flow in currents,

Splashing over the rocks, in a race to get to the finish line,

I take my headphones off,

Takig in the sounds of the stream, flowing by,

I hear it splash, and squelch and protest it’s hard jurney,

Slowly, I slip off my runners and ankle socks,

And set them on the marshy banks of the stream,

In my bare feet, I hop into the shallow stream,

I gasp at first, at how cold it is,

It feels like standing on a block of ice,

My heels bounce on the smooth, wet pebbles beneath me,

The water’s so shallow,

That it barely splashes against my ankles,

And I can hear a crow cawing, not far away,

It warms up a little,

And I smile too myself,

Because here, in this moment, I feel at peace