Sometimes, I have FOMO
until I’m out and about
and miss my solitude

Sometimes, I get lost
within myself and
my dark thoughts swirl

Sometimes, I have FOMO
until I see myself in others

An ex once told me

and it embarrassed her.

That took the grin

right off my face

and put me in my place.

Junior neighs as I get closer.
I want to think he’s happy to see me
but know he wants the apples I hold.

His mom joins him in song
as she learned to get hers too.

Pretty soon the two horses
have told their friends and family
and I’m bringing apples to
feed everyone.

Junior glares at me when I’ve
forgotten his treat
and tell the rest of my misdeed.

One bit my hand trying to find
the apple not there.
The others were a bit more understanding
and agreed I could make it up
tomorrow.

I remember the 5 gallon ice cream buckets
and jumbo sized Lays potato chips
that were supposed to be hidden in our deep freezer.

My dad came into the den when I was watching TV with
my boyfriend at the time
and brought the bag of potato chips
he had found.

Looking back, I feel bad.
He hungered for something he didn’t have
and couldn’t find
in a bag of potato chips.

At the time,
I was an embarrassed 14 yr old
whose boyfriend was trying not to laugh.

My dad didn’t seem to have a clue
about his actions or the reaction he received.
And I’m a little grateful for this

The cabanas look
more like umbrellas of a
single monotonous color
standing at attention
like good military soldiers.

I prefer the international umbrellas,
the multi colored ones
that I saw at the lavender festival
last week.
They were much more vivid
set against the constant blue of sky. 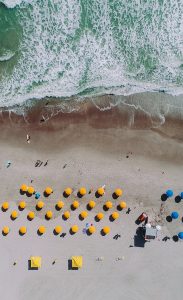 Come on Mom
just a bite, please?
It’s good for me –
full of fiber and water
with just a touch of sweetness.
I don’t ask for much
just some love
and an occassional
watermelon snack.

Don’t think so much Susan
Turn the news off,
turn the entire TV off.
Stop distracting yourself with
things that don’t matter.
Go outside,
sit in the grass and
take pictures of your birds.
Get off the couch,
go, smell the scents of the world.
Have some fun,
it’s okay to have fun,
it’s okay to be alone,
it’s all okay in the end.

Don’t think so much Susan
The past won’t change,
the future is unknown.
What are you doing now,
what do you have now?
Want what you have before
wanting more.
What do you read, listen to,
watch?
What do you take in, focus on,
obsess over?
Relax, it’s all okay even when it’s not.

Don’t think so much Susan
Don’t worry about announcing
you’re living your best life.
Just live your life
whatever it may be,
whoever it may be with.
You don’t have to prove you’re
always on top of it all,
doing your best,
doing better than you are.
Proof is not what life is about.

Stop thinking so much Susan

Roe vs Wade was overturned today

I walked into the break room and found
my coffee pot gone.

Elsewhere a teenager girl finds she’ll have to carry
her father’s baby to term.

We’re back to one hundred years ago.

I walked next door to the coffee shop,
sneaking out of work unseen
to not get caught but
their coffee was weak and I needed caffeine.

She went to a neighboring state
borrowed money for gas, drove all day
and found out she was too far along
but at least she won’t be imprisoned for murder
when she returns home.

A year ago this time,
mass graves were found
of indigenous children killed a hundred years ago
at old residential schools
They were stolen from their parents.
They were wanted and they were not wanted.

Three years ago in Perris California
13 children were found
imprisoned by their parents
in basement cells and
tortured in their house of horrors.
Allowed to eat once a day,
shower once a year
kept chained to their beds.
The foster family where they were sent
after their escape
was arrested and charged with abuse.
They were wanted and they were not wanted.

Children are sleeping in case worker’s offices
because there is nowhere for them to go.
Children are living in the streets,
neglected, hungry and prey.
They are wanted and they are not wanted.

Roe vs Wade was overturned today.

The coffee pot was gone from my break room.