I know this is terribly prosaic, but 1. I’m too tired to pursue another angle and 2. I forgot my second point (see: 1).

Every other weekend my sister and I stayed with our grandmother,
who lived at the bottom of sloping Lawndale.
We took a bus downtown on Saturdays
and downtown meant Kresge’s.

Though, we would also pop into Macy’s,
the department store was our main destination.
The street-level floor held cosmetics, jewelry and toys.
I don’t remember the upper floors.

Of course, we had our hamburger lunch
downstairs, in the Kresge’s diner,
where our grandmother would steer us to one of the red leather booths
to wait for our waitress, an older woman with red hair in a beehive.

My first milkshake was in the Kresge’s diner.
If it had been around when I was older and began taking myself downtown,
would I still be as charmed by the simple fare,
those high-backed seats and the red-haired waitress? 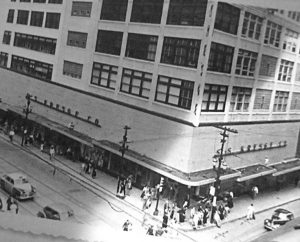